Last week I ran a 'Cohort' at the Third National ITL Masterclass. The conference format was quite different and to my liking. Delegates were split into cohorts and worked with a facilitator over two days around a particular idea, developing an authentic product and acquiring skills and an extensive personal learning network in the process.


I decided to run a new and improved version of the project as I did last year since it deserved another audience, this time NSW rather than SA. Entitled 'Nil Satis Nisi Optimum: Nothing But the Best is Good Enough', we examined the 'moral imperative' in teaching, the latest research, what good and bad teaching/eLearning/PD look like, why many teachers are reluctant to engage with technology and how we can help such teachers overcome their fears. All the while we engaged in a variety of technologies that the cohort picked up on as part of the process, rather than being drilled specifically e.g. Twitter, Prezi, Padlet, Creative Commons, Popplet, Weebly, VideoScribe, YouTube, Google Docs, Google Forms and Flickr.

The Prezi below contains all of the stimulus material used including quotes from Fullan and Hattie plus some excellent Creative Commons images from Flickr.

After getting things started we had a brainstorm about what a great teacher looks like using Padlet. The final results are below and can also be found here. 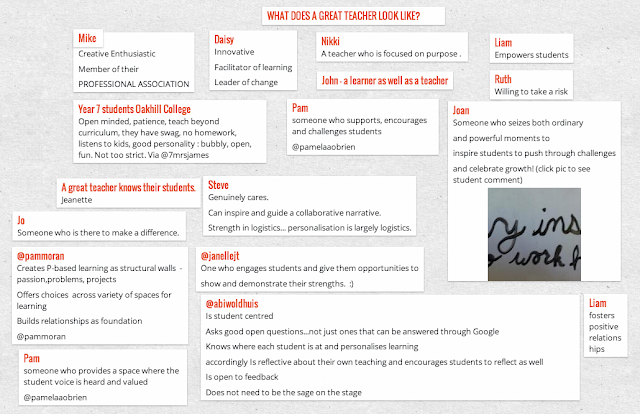 The interesting thing about this exercise was that after the cohort did their initial brainstorm, @LiamDunphy put it out on Twitter and his PLN responded... from County Mayo, Tipperary, Virginia and even some Year 7 students from Sydney! This was an excellent demonstration of the power of Twitter, a PLN and global citizenship.

Following the Padlet, the cohort discussed a series of questions and collated their answers in a Google Presentation (see below).

This Google Presentation was then used as a central crowdsourcing point, very much following the example of @TomBarrett's 'Interesting Ways'.

Over the course of the two days we worked and collaborated our way through the material, always with the end product in mind. To bring everything together, @LiamDunphy and @Largerama developed a Weebly, and,  to be a hit in the plenary showcase, @mrsdaedalus, @rubeth and myself made a RSA Animate-esque VideoScribe explaining our work and @astrodidit @dlittle_mhs @nikki_dwyer @AnnaCoop112 @JeanetteBlack08 made a 'Harlem Shake' (see both videos below).

Not that I'm competitive but I think we nailed the showcase presentation!

It was a wonderful experience to work with Cohort 6 (and it was a great coup that the Keynote, Nick Jackson aka @Largerama, chose to join our cohort). I wish them all well as they take some of these ideas back to their schools and I look forward to working with them in the future via Twitter and other means. Go team!
Posted by Simon Crook at 9:19 AM