The Future of Technology in Education

I was pleasantly surprised to be asked to present at the 2013 ACEL Conference: The Future is Now in Canberra. The motivation to present was the prestige of the conference, my current work on what future schools will look like, plus building on previous work such as Welcome to the Future ...Today and What does it mean to teach in a technology-rich world?. Accordingly, I chose to present on The Future of Technology in Education. Below are the abstract, the presentation itself and an explanation of the slides (those that attended should note that fuller explanations of slides 27-30 are included below).

If we are to prepare students (and for that matter, teachers) for their future, what will the future of education look like? What new technologies are on the horizon and which ones will become de rigeur? Are there ‘futuristic’ technologies already being used successfully in schools? Drawing on the latest research, this presentation will look at the future directions of technology in education, inside and outside the classroom.

Future opportunities and how they might be capitalised upon e.g. teacher collaboration will be discussed. Examples of the innovative use of contemporary technologies in teaching and learning, K-12, will be demonstrated. The emerging challenges surrounding technology that are facing education leaders, such as professional development, accessibility, evolving societal pressures, and how they might be overcome will also be discussed. As the saying goes, “do not confine your children to your own learning, for they were born in another time”


Slide 1 - My ever present opening slide. What is wrong with this slide? Nope, it's not the kid with the slate (get it! :) the image is back to front, the writing on the board goes from right to left.

Slide 3 - It is important that this whole presentation is ground in the latest research. The most obvious and important choice for future technologies in education is of course the annual Horizon Report.

Slides 4&5 - The 2013 DEAG Report, commissioned by the Australian Government, makes some important recommendations to prepare schools for the future of learning.

Slide 6 - With the end of the Federal funding in the DER we must not lose the momentum created thanks to the embedding of so much technology in schools. Equally, we must learn from the various evaluations of the DER by DEEWR, DECNSW and (as a shameless bit of self-promotion) my first and second papers.

Slide 7 - Before Google, the teachers were the sole bastions of knowledge. Post-Google, students can find out simple facts using simple Google searches, Wikipedia (copying, pasting and plagiarising) and even acquire skills e.g. learning the guitar via YouTube, all on mobile phones that are banned in most classrooms. From about 2016 according to the Horizon Reports (or 2020 according to Wikipedia), the Semantic Web will be all-pervasive with a far more personalised online experience.

Slide 8 - Consider the new NSW Board of Studies Syllabus for Australian Curriculum History. If we only ask simple questions of facts, students can answer these in seconds.

Slide 9 - However, if we ask deeper, higher-order, personal, subjective questions students will not be able to google the answers.

Slide 10 - Ask Ungoogleable Questions (a phrase I heard from @ewanmcintosh). I am not saying Google is bad, but in its simple form it is pretty low-order (as shown in Bloom's Digital Taxonomy). We need to offer students higher-order questions and opportunities. At the very least we should extol the virtues of 'Advanced' Google searches.

Slide 11 - Whether within or outside the classroom, students can collaborate with their teachers and each other, importantly receiving immediate and regular feedback through cloud computing apps like Google Docs and Edmodo.

Slide 12 - Teacher Collaboration: teachers can also take advantage of these technologies and collaborate too, not least with collaborative programming for the Australian Curriculum using Google Docs.

Slide 13 - Teachers don't need to rely solely on formal professional development or the collegiality of the teachers they work with. Through TeachMeets and the networks that ensue, teachers can be proactive in their own professional learning in a fun, informal and highly beneficial environment. (Check out http://www.teachmeet.net/what-is-a-teachmeet/).

Slide 14 - Quick plug for all English and Drama teachers, K-12, to attend the English Australian Curriculum TeachMeet at the State Theatre Company. Should be a great Friday night out! See http://tmsydney.wikispaces.com/TeachMeet+AC+English for details.

Slide 15 - Hand in glove with TeachMeets is networking with fellow educators through Twitter. On Twitter there is a whole variety of awesome teachers willing to collaborate, share resources, converse with and even mentor. On this slide is an all too brief (and nepotistic) list of some of the people I collaborate with and learn from. They represent educators from government, systemic Catholic and independent schools, interstate and overseas.

Slide 16 - Teachers need not feel isolated as they can now tap into thousands of expert and similarly specialised teachers via Twitter. One way to find specialist colleagues is via 'hash tags' on Twitter, some examples of which are listed here. These allow for subject based conversations that can be searched for easily. The list on the left shows global conversations. The list on the right shows Australian hash tags. In both cases these conversations are sometimes organised for specific times in the week.

Slide 17 - A couple of Prezis to help teachers and principals with Twitter and understanding it's power for collaboration and online presence.

Slide 18 - Other ways teachers are collaborating include using things like Pinterest to find teachers from the same subject area to follow, post and share resources with. In the example shown, my colleague Bettina, from All Saints Girls Liverpool, is a Spanish teacher isolated in a local network of Italian teachers. She uses Pinterest to find and connect with other Spanish teachers form North America.

Slide 19 - With most, if not all students having a mobile phone (check out the ABS stats), why are they banned from most schools and classrooms? Now that the Digital Education Revolution has ended and the Federal funding stopped, how are we going to maintain the momentum of embedded technology in the classroom. One answer is to let the students bring their own mobile devices. There are solutions to the issues of cost and equity, not least schools supporting the minority of Australian families that cannot afford any device. There are also technical solutions for the techies. Several schools are running pilots of BYOD, including some I work with in low SES areas, plus @aliceleung's school, again in a low SES area.

Slide 20 - A great image that passed my way that sums up the power of mobile devices and their underutilisation. 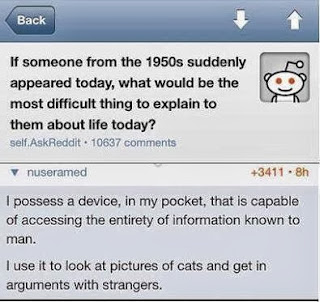 Slide 21 - A lot of people do not realise that many students already have programming skills and enjoy coding. Under the guidance of my colleague Jason at Good Samaritan College Hinchinbrook, there are Year 10 girls and Year 11 boys writing literacy and numeracy apps respectively for the neighbouring primary school students. The older students are using the actual NSW Board of Studies syllabuses to create and differentiate the questions for the littlies. This is an amazing story - well done to Jason and students!

Slide 22 - Identified in the 2013 Horizon Report was the emergence of 3D Printing over the next four to five years. 3D printing uses computer-aided design (CAD) software combined with a plastic extrusion-like process to create tangible, three-dimensional objects. Despite the timeline suggested, it should be noted that several schools have all ready purchased and are using a 3D printer. For example, Clancy College in West Hoxton, is using its 3D printer to make topographical maps in Geography, molecular structures in Science, mobile phone cases in Design and isoloc hybrid joints in Timber only possible in CAD.

Slide 23 - Game-Based Learning: why not use Angry Birds to teach projectile motion as this pic from @aliceleung's classroom shows? There is also a great blog post by Wired on this.

Slide 24 - Taking GBL to the extreme, Michael from Freeman College Bonnyrigg is using WWE Wrestling on the XBox to teach literacy! The students have to write correct instructions on their moves and counter moves. Based on their writing the moves are then entered into the game to simulate the fight. As an incentive, a couple of students get to play at the end of every lesson.

Slides 25&26 - Global Citizenship: These slides were videos from All Saints Girls Liverpool and a school from China (thanks to Jenny from Liverpool). With Skype in the Classroom and online sharing through things like Dropbox and Google Drive, students from two different hemispheres can collaborate together. The Liverpool girls sent video footage to China of themselves acting out Cinderella. The Chinese students overlay the audio, in particular the dialogue, as part of their study of English. The Chinese students then shared back the finished product which was very funny and a great exercise all round.
In the second video, the Chinese students sent over footage of them playing hide-and-seek around their homes. What was particularly interesting for the students from southwest Sydney (a low socio-economic area) was how salubrious the homes were of the upper-middle class in China. This was a real lesson in global citizenship.

It is important to note that this happened in 2011. With the Asian cross-curriculum priority in the Australian Curriculum from 2014, is this kind of collaboration happening in every Australian school? If not, why not?

Slide 27 - Getting into the more extreme predictions of what schools will look like in the future, Neil Selwyn of Monash University discusses in this article things such as smart drugs, haptic technology, robot teachers and moveable and modifiable schools.

Slide 28 - Spreading their bets, the OECD present 3 pairs of possible scenarios for schools in the future in this article. I am fearful of the first pair i.e. maintaining the status quo. There is a lot of research (including some of my own) plus plenty of anecdotal evidence, not least the proliferation of the industrial model of schools, that would suggest this may well be the case. Many educators will prefer one or both of the second pair 'Re-Schooling' which "would see major investments and widespread recognition for schools and their achievements". Futurists may prefer scenario 3a in 'De-Schooling' with "the abandonment of schools in favour of a multitude of learning networks". Capitalists may prefer 3b where "many new providers are stimulated to come into the learning market, encouraged by thoroughgoing reforms of funding structures, incentives and regulation".

Slide 29 - A great quote from Halverson and Smith (2009, p.52) warning of the institutional mindset in many schools and systems that manipulate new technologies to maintain the old paradigm and status quo:

“schools seemed to pick up on affordances that reinforced institutionalized priorities. Rather than opening up new opportunities to reframe how teachers teach and students learn, it seemed as though instructionalism bent technologies to extend existing pedagogical, curriculum delivery, and assessment practices”

Slide 30 - To the contrary, Weston and Bain (2010, p.14) highlight that technologies can be used as a catalyst for a paradigm shift in proactive schools:

“[technology] initiatives can be fertile ground for the creation of new-paradigm schools, schools that are self-organizing” by  turkletom
My ever present final slide: a fantastic augmented reality pic to prove the point that if students aren't engaged they will find very creative ways to use their technology instead. Combined with this picture was the quote, often (though not definitively) attributed to Rabindranath Tagore:


"Do not confine your children to your own learning,
for they were born in another time"
Posted by Simon Crook at 11:01 AM