Last week I was fortunate enough to facilitate a 2-day workshop at the Second National ITL Masterclass in Adelaide. It was quite an interesting concept with delegates splitting into cohorts and working over two days on a theme, developing a PLN, creating resources plus a final product to showcase, almost an intensive, project-based form of contemporary adult learning.

My workshop was called 'Nil Satis Nisi Optimum' (Everton's motto :) meaning 'nothing but the best is good enough'. Below is my prezi plus an outline of what we did.

Apologies in advance, there may be a whiff of narcissism here, but a couple of bizarre things happened recently at the K-12 Technology Congress in Darling Harbour, Sydney.

(Before the surreal events are unpacked it must be stated that overall it was a great conference with some excellent speakers and I was honoured to be asked to MC the afternoon of the first day).

Back to surreality, during the morning of the first day, along with many others I was a bit of a demon on the Twitter back-channel. However, maybe due to a lot of colleagues following proceedings from afar or maybe because of a frivolous use of other hashtags but I seemed to be retweeted a lot. This must have happened to quite a degree as this tweet suddenly appeared:

It was quite bizarre to see Trends Australia state that I was 'trending'!?! In my ignorance I didn't even know a person could trend (I thought only hashtags could). Not only that, @jonesytheteachr pointed out that I was briefly trending ahead of Justin Bieber and 1Direction!?!?! To compound this craziness further, after Professor Barry McGaw (Chair of ACARA) finished presenting he was able to field one question...mine. My question was not particularly mind-blowing but unbelievably the back-channel was being projected straight behind him and @pipcleaves tweeted: 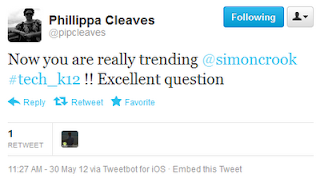 It is much to my embarrassment that when presented with perhaps my only opportunity ever to quiz the pre-eminent academic responsible for the new Australian Curriculum, upon receiving his answer I was somewhat distracted and trying to stifle a laugh as this appeared behind him 5m wide! Profound apologies Barry.

To top off this narcissistic episode, in concluding the first day the main MC (Arron Wood) summarised that we heard 'this' from Alan November, 'that' from Stephen Heppell, 'the other' from Sir Ken Robinson and from Simon Crook that "we should look to work far more close together cross-sectorially and collaborate between State, Catholic and Independent schools far more readily". To be included in the same sentence as these demi-gods is unbelievably flattering and crowned off a quite surreal '15 minutes of fame'.
Posted by Simon Crook at 8:39 PM No comments: