Below is a podcast I recorded for the students at ACU regarding eLearning in education and its future trajectory. Also below is a list of the resources I refer to plus some others that may be of use. 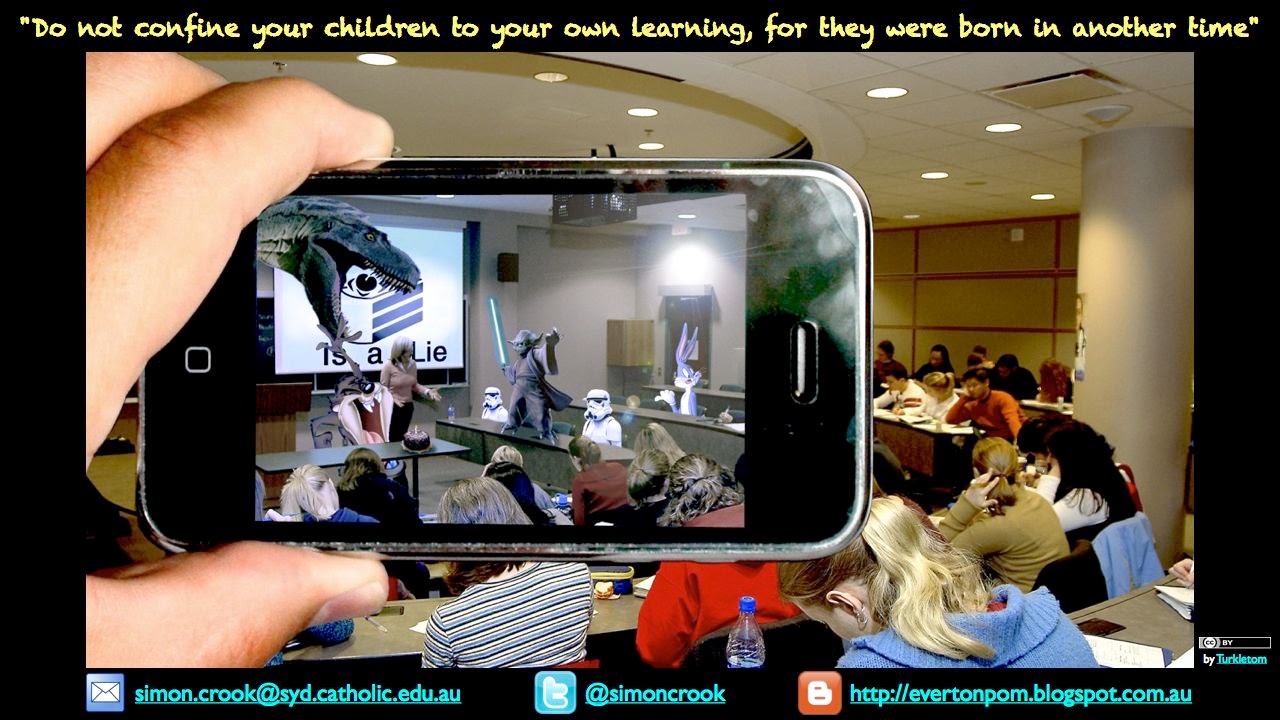 Thanks to an impromptu Google Alert I learnt that the recording of my presentation at TM Edutech (as described in this blog post) actually appeared in the TER Podcast this week. Many thanks to Cameron Malcher for recording and running the excellent TER Podcast (this episode is particularly interesting :-)

The original recording can be found here and also below. My section kicks in at 34:25 and runs for 11 minutes (kind of broke the TeachMeet limit of 7 minutes...oops...). All credits to TER Podcast and thanks for allowing it to be embedded.

Posted by Simon Crook at 8:22 PM No comments:

iPeed on the iPad: Physics for Pre-schoolers 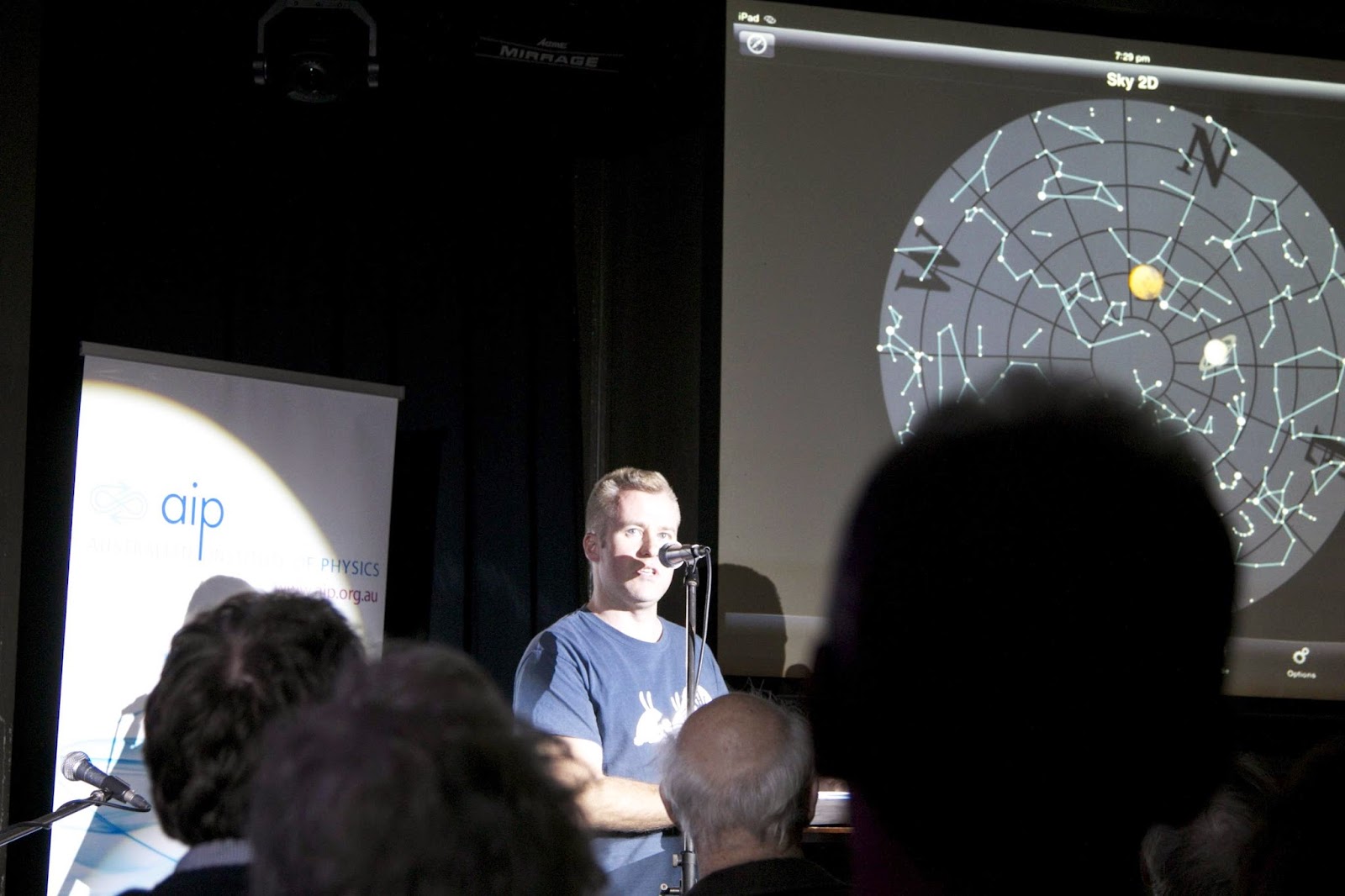 The other week I had the pleasure of attending the inaugural Institute of Physics NSW Physics in the Pub bash in Sydney, hosted by +Phil Dooley. It was an excellent night of presentations (8 minutes each, TeachMeet-style), all of which were very informative and some also very entertaining, musical and humorous (check out Physics Hacks by Chris Stewart - very funny (bad language warning)). The networking was also top notch.

My contribution was 'iPeed on the iPad: Physics for Pre-schoolers'. Essentially, I demonstrated how a pre-schooler could have fun (learning physics at the same time) on the iPad using such apps as Planets and Universe Splitter. A recording of my presentation can be viewed below. Many thanks to Phil for organising, hosting and entertaining, Boris and AIP NSW for supporting, Chris for also entertaining and cutting the videos and to Shane Hengst from UNSW - Physics Outreach Unit for the photos.

Posted by Simon Crook at 4:03 AM No comments:

Below is the recent ABC Radio National broadcast of last year's ABC Splash Live event (previously described in this post). My presentation 'What does it mean to teach in a technology-rich world?' kicks in at about the 29 minute mark after some great work by Bron Stuckey and Dean Groom, and before Alice Leung's top draw presentation. The original recording and description can be found here on the Radio National site. Many thanks to Kulja at @ABCSplash.

Earlier this month I had the fortune to attend the Edutech conference in Brisbane. It was a great event with some excellent speakers, Sugata Mitra being the best (what a way to start a conference!). However, the best thing for me was the networking, getting to know some of my up-and-coming colleagues in our delegation, and of course the Edutech TeachMeet.

Thanks to some typically hard and selfless work by +Matt Esterman, working with the event organisers not least Jon Chivers, a great space was arranged in the main Expo for four mini-TeachMeet sessions. The first session was kicked off by the ever youthful grandfather of TeachMeets +Ewan McIntosh, with 16 presenters all up over the two days. My presentation 'Giggle - the Lighter Side of Ed(u)Tech' was a major expansion on 'Giggle the funny side of Edtech' from TM ACU with references to 'Giggle (and Hoot) - the funny pre-school side of Edtech' from TM Google (essentially third time lucky). The slides can be found below. Most of them are self-explanatory. A podcast of my presentation also appears here on the TER podcast (thanks @capitan_typo).

A big thank you once again to Matt, Jon and the other organisers. Great to finally meet the likes of @wholeboxndice; always good to catch up and chew the fat with Matt, @largerama and @danhaesler; and one can never forget those crazy guys from the inner west (ping @jamiewahab, @chad_ferris, @steve_borthwick, @MelSmiles5, @ZeinaChalich and the gang). Here is a video to accompany the earlier post Authentic Learning in Primary Science.